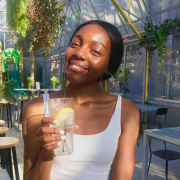 When it comes to deciding on learning a new language, I can guarantee that for most people French is one of the top three languages they’d consider learning (I’m pretty sure Spanish is there too). But just like with most things in life learning a language isn’t as easy as you think it is, which is why it’s important to remind yourself of the reasons why you decided to to pick up this new skill!

Looking for some inspo? Well, here are four reasons why I decided to learn French, and hopefully it could inspire you to do the same!

As many of you know, my family originate from Congo (both the Democratic Republic and the Republic) where French is the official languages, so both my parents can speak fluent French. However, that being said we don’t speak French at home but we do speak Lingala which incorporates a lot of French words.

Because of that, it was pretty easy for me to pick it up in school as I was familiar with many words and phrases that I’ve heard family members use.

The word ‘euphony‘ is very much a musical term that relates to something sounding sweet or pleasant to the ear, but I think this can also apply to languages like French. To me, I love the sound of French: it’s romantic, it’s sexy and it also sounds very intelligent! It just sounds so seamless, especially when you hear it in songs or in conversations, even in political debates!

And when I stop and hear myself speaking in French, I can help but feel a little smug (in a good way of course)! It goes to show that all my years of learning the language really paid off!

For me, it made perfect sense to choose French as part of my degree. I studied Politics and International Relations and the majority of international organisations actually have French as their official language. These include United Nations (UN), the North Atlantic Treaty Organisation (NATO) and of course, the European Union (EU).

Plus, I spent my year abroad in Brussels which has been dubbed as the ‘Capital of Europe’ because many of the EU’s institutions are there as well as NATO’s headquarters. It was a decision that turned out to be extremely handy especially when it came to reading texts when it came to my essays and even my dissertation!

Quatre: à cause de mon diplôme particulier ~ because of my degree in particular

To be completely honest with you, despite having a great interest in all thing politics and international relations, I choose my degree just so I could experience studying and living abroad and boy it was one of the best decisions I’ve ever made! I loved every moment of my year abroad and thanks to it, it allowed me to feel more comfortable and confident to speak French, as well as building other aspects of my personality.

It’s definitely a heck of an experience that I encourage anyone to take, especially if they’re currently at university!

Sorry to blow my own trumpet but being able to speak another or multiple languages is a big flex that I’m proud of (I can speak four languages), and anyone who is able to do so should also be very proud of it! And I do hope that this mini post has encourage you to just f*ck it and go for it – learn a new language! For more tips and tricks plus, language learning inspo check out my ‘language learning’ category!